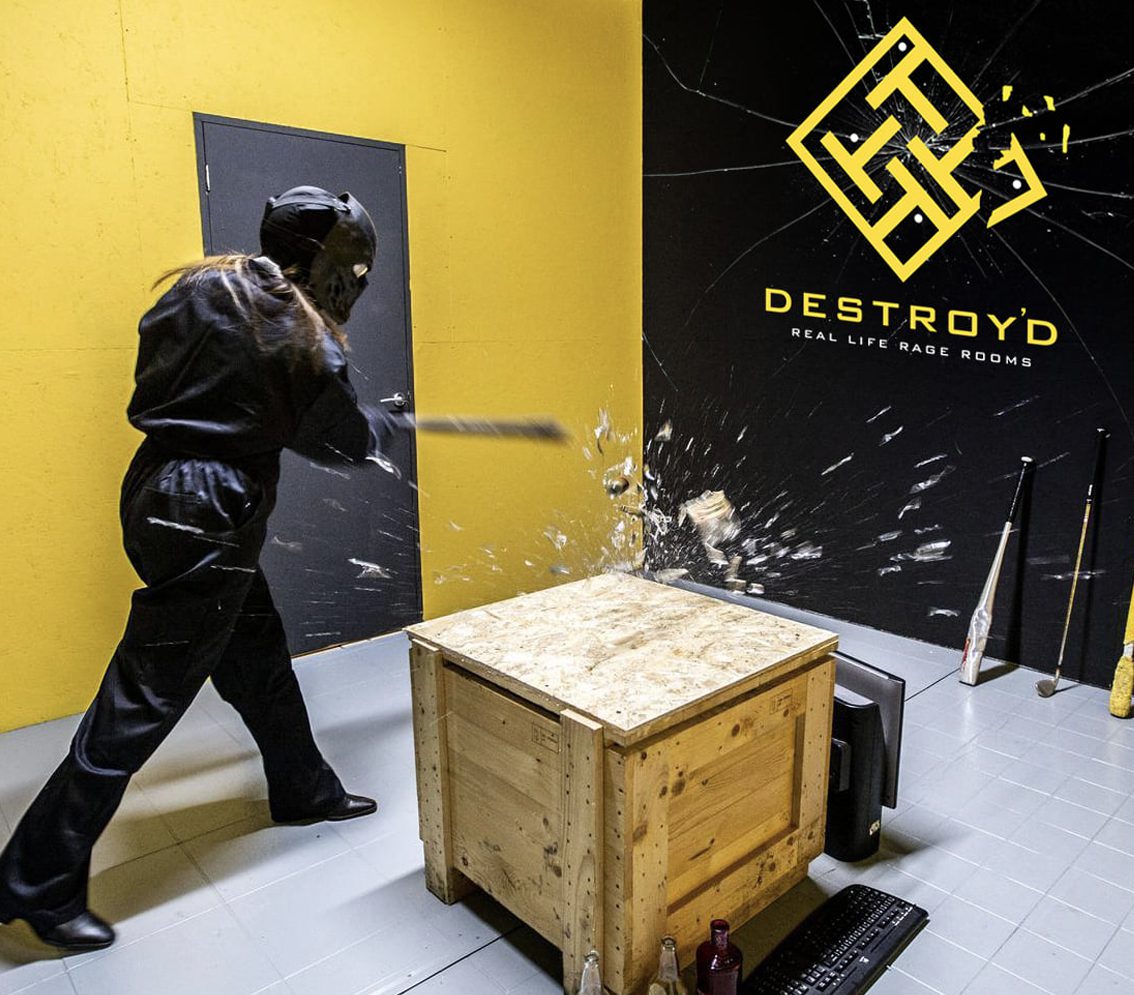 What are rage rooms?! The idea behind a rage room is that it is a controlled way to release anger or to just have fun!

Hello, its Chelsea here, one of the Trapp’d Games Masters and I’m here to give you all a little bit of information on our rage rooms. Now some of you may have done a rage room before, however if you haven’t I’m hoping I can answer some of the questions you may have!

So let’s get right into it with the main one…What are rage rooms?! The idea behind a rage room is that it is a controlled way to release anger or to just have fun!  The best way to initially describe a rage room is by imagining a room. In this room, you have various objects and various tools, with the idea being to destroy everything in sight. Sounds interesting doesn’t it? The objects that are in the room range from crockery and bottles to printers and monitors! These items are in the room with the soul purpose of being destroyed using the tools provided in the room! The tools that are waiting to be swung in the room include various bats and also a sledge hammer, where else can you find an excuse to hit a printer with a sledge hammer?!

Trapp’d have several large suppliers around the uk who are able to sell us their faulty electrical equipment and damaged goods so we have a huge supply of items, ready for you all to smash! Once all the items are thoroughly destroyed, Bailey’s Skip, our kind sponsor, will come and collect a skip full of our used rage items for a quick and simple disposal.

Now I’m not sure about yourself, but I had never personally heard of Rage rooms before working at Trapp’d so I was interested in finding out where the idea came from. The minds behind  Trapp’d first discovered the idea of rage rooms whilst visiting New York. They loved it so much that they just HAD to bring the idea back to the UK! After lots of research and overcoming obstacles, they were finally able to open our very first rage room in Stockport. This was so popular that Trapp’d continued to open more rage rooms at different locations such as Corby and Billing Aquadrome. The rage rooms continue to be a very popular attraction at Trapp’d and it’s clear to see why! We see people from all age groups coming in to experience the thrilling release that rage provides, all with their own stories as to what they are purging. However that being said, anger release isn’t the only benefit from a rage room.

Apart from the fact it is incredibly fun and a great anger release, rage rooms do actually have some real benefits. Many of these benefits are health related, with exercise being a key one. When I think of the word exercise, I think of running or cycling but now, thanks to Trapp’d, exercise can mean getting your heart pumping in a safety suit whilst hitting away at objects or punching a boxing bag! I think it’s fair to say people don’t come to a rage room expecting to leave feeling physically exhausted but surprisingly most people do! This is why I think rage rooms are a great alternative to average exercise activities. Of course there are some other benefits that aren’t purely exercise. These include: a sense of empowerment, freedom to “let it out”, motivation and it can also be a bonding exercise! It’s very freeing to go into a room, knowing that you can destroy everything and not have to worry about any repercussions or having it be your own belongings! On that note, if you do have any personal belongings that you have the urge to purge, Trapp’d does allow you to bring those items with you to destroy!  These can be brought with you at no extra cost, providing yourself with more items to break during your time in rage.

So in summary, there are so many  positive reasons to get yourself into a rage room. Whether you’re looking for a fun exercise alternative or a new date night experience, rage rooms are perfect for any scenario. The cost is only £50 for 30 minutes in our rage rooms which is amazing value for money, and I bet you won’t regret your experience at all!

That’s all from me for now everyone, thanks for reading, and I hope I managed to shed some light on why rage rooms are a great activity! To book a rage room or for more information, head to our website!